Communicating with the Board:  Members are reminded that all communication with the Directors of the Board is via the email address: secretary@rpsbs.com.au using the feedback form which can be downloaded from https://www.rpsbs.com.au/the-society/feedback/.

Newcomer Scheme: As stated in the April bulletin, the Riding Pony Newcomer Scheme will be standardised throughout Australia as from January 1st, 2022.  The 2020 – 2021 newcomer seasons in Queensland and Western Australia have been extended to 31st December, 2021.  All existing state newcomer rules remain in place until January 1, 2022.  Details of the rules and registration procedure will be provided after the September Board meeting.

The State Meetings will have a time limit of one hour.  Reports will be published on the states’ web sites prior to the meeting.  Members wishing to put questions on notice are asked to submit them at least five (5) days prior to the meeting using the feedback form (see dot point 1).  Please note that only questions relating to state committee matters will be addressed at these meetings.  Questions relating to Board matters need to be addressed to the RPSBS Ltd Board using the Board secretary email for discussion at the Annual General Meeting at the beginning of July.

Questions on notice will be answered first after which any member present may ask one question.  If there is time after all members present have had a chance to ask a question, a member may ask a second question.

From the National Office

Please ensure paperwork is submitted immediately on making any direct bank transfers to ensure payments can be receipted promptly and correctly before end of month reconciliations.

Transfer Applications cannot be recorded/processed until the Society is in receipt of the Original Registration Certificate so please mail transfers to the office (preferably with tracking). Do not email transfers.

If emailing any other paperwork, please first ensure the pdf or jpg is legible when viewed as an A4 size document, and then attach the file to your email.  Please do not embed or insert the file into your email.

Inserting/embedding often means that they cannot be printed easily on one page and are often illegible, meaning we have to request new scans or images from the sender. 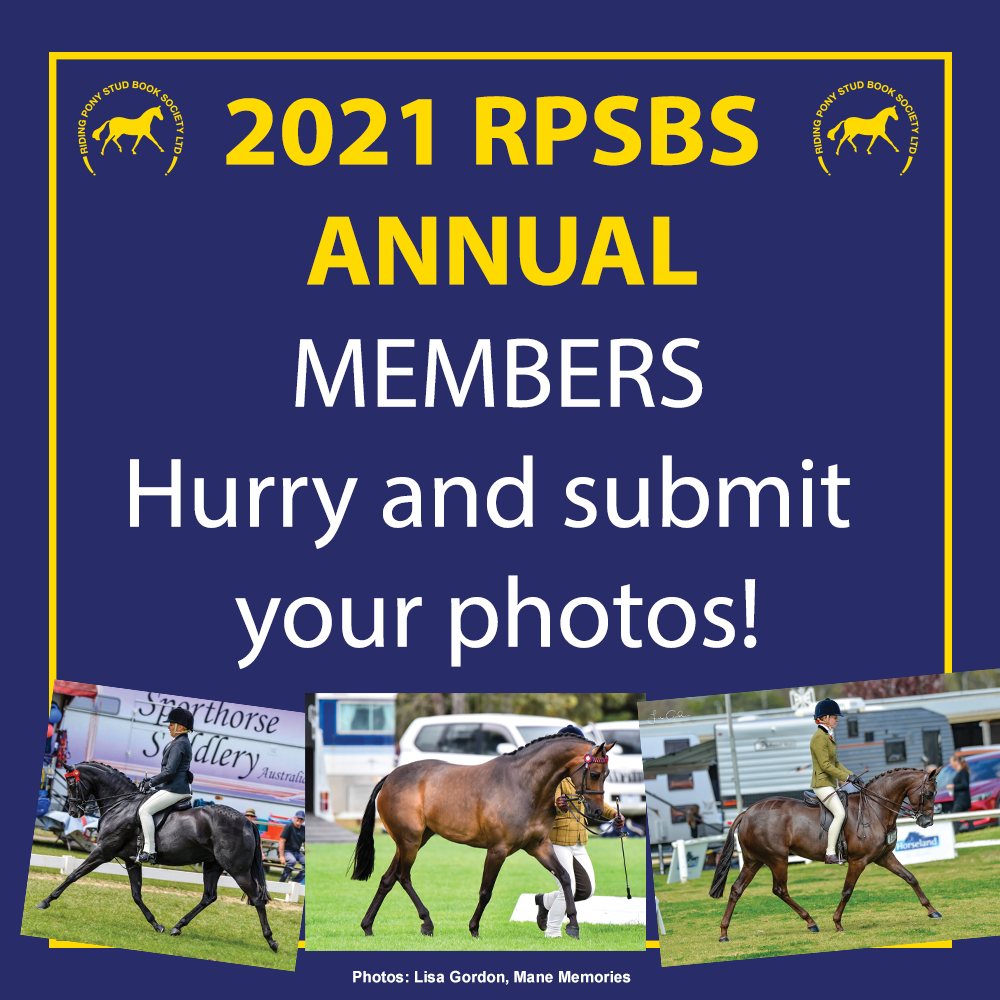 We are now working on the 2021 RPSBS Annual, and are requesting photo submissions!

We are also taking story submissions and ponies / people remembered submissions. We need to be notified of these as soon as possible to we can leave enough room for your inclusion. Please email annual@rpsbs.com.au 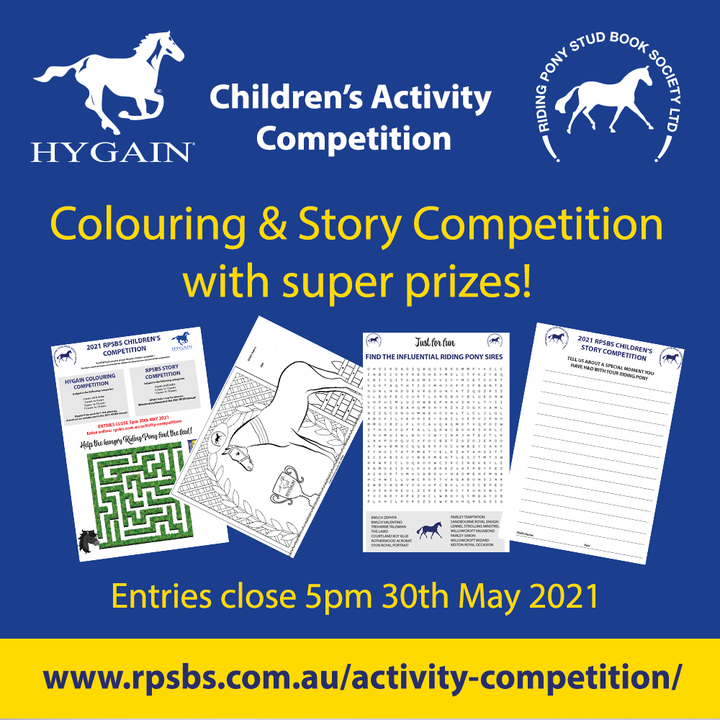 We are excited to be running our Children’s competition on the back of the success of our 2020 Colouring Competition. This year we have a colouring and story competition with some great prizes and fun activities for the kids!
DOWNLOAD THE ACTIVITY BOOK

Remember the exhibitor, rider and handler all need to be current members to compete.

The last few week has seen NSW host some of the most prestigious Horse Shows in the Country. How lucky we are to be able to enjoy watching the best Show Horses in Australia in our backyard!

Of course Riding Pony bred exhibits featured heavily in the placings in almost all categories. Not surprising as that is essentially what they are – Show animals.

Huge congratulations to all of the members whose exhibits triumphed in these massive fields. No mean feat at all. We all know how much time, expense, soul, and sacrifice go into these wins, so well done. Its not just the winners though that put in the hours etc. Acknowledgment also to everyone who produced their exhibits so brilliantly. Not all of us can win the ribbons, but we love our ponies just the same- well done.

Sydney Royal Riding Ponies this year were overseen by judge Cath Bradley from Victoria. Her experience in the breeding of Riding Ponies and Show Horses came to the fore with her chosen exhibits being of lovely true-to-type animals.

The last few week has seen NSW host some of the most prestigious Horse Shows in the Country. How lucky we are to be able to enjoy watching the best Show Horses in Australia in our backyard!

Toowoomba Royal Show Riding Pony classes were held on Friday 12th April.  Due to uncertainty surrounding COVID-19 the horse events were paired back to a three day program with most breed  Youngstock classes deleted.

To view the results of all RPSBS classes at the show go to  https://www.rpsbs.com.au/toowoomba-royal-…ing-pony-results/

A special thanks must go the Ringmaster, Catherine James, for the tremendous support she has given to the RPSBS Queensland Committee over many years.

April saw the results of the committee elections.

Here in Victoria we welcome two new members in Sally Murrell-Rich and Rebecca Wall as well as the re election of Diane Jose.  Paul Morath decided not to nominate for re-election and we thank Paul for his support and dedication to the Victorian member base during his time.

Going forward we have our AMM on the  22nd May 2021 via Zoom proceeding at 11.30am.  Details for dial in and RSVP will be available on our website.

We are running a Riding Pony ring for foals and youngstock at the NEBRPG Welsh Winter Fair at Tatura on June 6th with our judge Christine Chaffer. The program and entry form will be up on shortly on our website.

State annual meeting is this week on the 11th of May.

For inclusion into the meeting please email Andrew on a_r_hunt@tpg.com.au to be sent the invitation and link to the meeting. The meeting is at 7.30 pm